‘THE PALEY CENTER PRESENTS LAW & ORDER: BEFORE THEY WERE STARS’ LOOKS BACK AT FRANCHISE’S LEGACY OF ACTORS 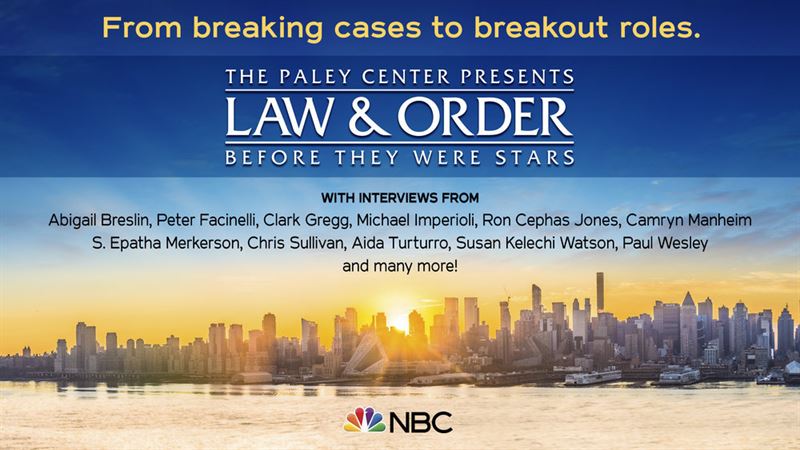 NEW YORK – Oct. 27, 2020 – Celebrating the influence of one of the most iconic brands in all of television, NBC will air the hourlong special “The Paley Center Presents Law & Order: Before They Were Stars” on Thursday, Nov. 12 at 10 p.m. ET/PT, immediately following the season 22 premiere of “Law & Order: SVU” at 9 p.m.

For an up-and-coming actor, an appearance on a “Law & Order” episode is a rite of passage. Since 1990, more than a few of the attorneys, victims, perpetrators, witnesses, kids, suspects and police of the week have gone on to become some of the biggest television and movie stars in the world.

“Law & Order is one of television’s most legendary brands and has served as a springboard for so many talented actors,” said Maureen J. Reidy, the Paley Center’s President & CEO. “We’re honored to partner with our friends from NBC to present this entertaining look at where some of today’s biggest stars got their first big break.”

In addition to the above, several prominent actors who have a “Law & Order” credit or two on their resume will be part of the special, including eight-time Oscar nominee Bradley Cooper.

For many actors, “Law & Order” was a way to earn their SAG card. Some played multiple guest roles on the series before becoming famous and will explain what the experience on set meant to them at the time.

Members of the “Law & Order” ensembles will recount the experiences of working with the great actors who were not yet household names. Some “Law & Order” cast members discuss appearing on “Law & Order” as other characters before landing a spot in the main cast. For example, Peter Scanavino appeared as double assailant Johnny Dubchek before he took the role of Sonny Carisi on “SVU.” Kelli Giddish played a victim before she joined the force as Det. Amanda Rollins.

With over 1,200 episodes from the “Law & Order” library to date and tens of thousands of roles for actors, it’s no surprise that many of them have gone on to incredible careers. This insightful look back is a celebration of 30 years of a legendary franchise and the stars who have helped pave the way.

The special will air the following day on NBCUniversal’s streaming service, Peacock.