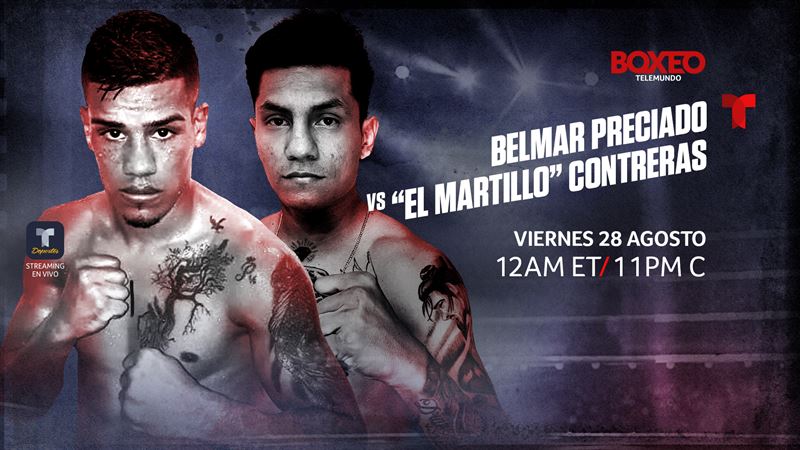 Miami – August 27, 2020 – “Boxeo Telemundo,” the #1 Spanish-language boxing program in the U.S., continues its all-star boxing lineup this Friday night, August 28 at 12am midnight ET. This week’s action will be headlined by up and coming stars Dennis “El Martillo” Contreras and Belmar Preciado, set to face each other in a 10-round fight for the World Boxing Association (WBA) Fedecentro Flyweight Title. The event will be broadcast live from Osceola Heritage Park in Kissimmee, Fla. on Telemundo as well as on the Telemundo Deportes App.

Mexican Dennis “El Martillo” Contreras (21-10-1-19 KO’s), is eager to take home a win against Belmar Preciado (20-2-13 KO’s), hoping it will be the key to more opportunities against U.S. based fighters. “I am ready to fight with anyone, I feel that I am in the best stage of my career, mentally, physically, with the experience to make a good fight, and fight with any champion,” said Contreras, adding he feels ready to fight with global featherweight stars such as Gary Russel Jr. and fellow Mexican native “Vaquero" Navarrete.

While this week marks the Boxeo Telemundo debut and first fight this year for both boxers, Preciado, the 32-year-old featherweight title contender is more than ready for the challenge. Friday’s fight marks the Baranquilla, Colombia native’s first U.S. fight following the cancellation of his St. Patrick’s Day bout against Belfast’s Michael Conlan at Madison Square Garden’s Hulu Theater.

Debuting in 1989, “Boxeo Telemundo” has grown to become the #1 combat sports program in the U.S. among Hispanics, across broadcast and cable landscape. Since its launch, “Boxeo Telemundo” has broadcast over 350 title fights, showcasing some of the biggest boxing stars as they rose to stardom and won their first championship titles, earning a reputation as the show “where champions are born." Among these stars is Saúl Canelo Alvarez, who won his first pro boxing title on “Boxeo Telemundo” in 2008. Other notable Champions featured include Juan Manuel Marquez, Diego Corrales, Carlos Maussa, Floyd Mayweather, Israel Vázquez, Wilfredo Vázquez, Rafael Ruelas, Jorge Solis and many others. In addition, renowned boxing Hall of Famers have also appeared on the show including Erik Morales, Marco Antonio Barrera and Felix Trinidad.