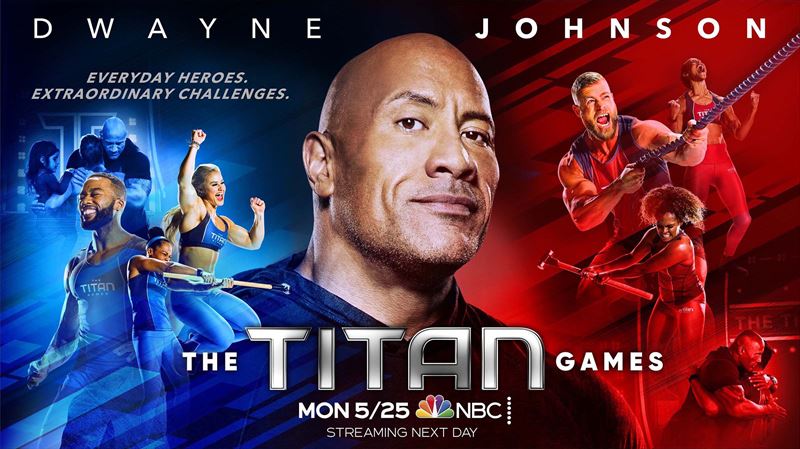 UNIVERSAL CITY, Calif. – May 4, 2020 – Dwayne Johnson has revealed the elite group of six world-renowned athletes to compete in NBC’s “The Titan Games.”

In addition to the new Professional Athlete Titans, this all new season of “The Titan Games” includes completely new elements to the competition including a brand-new Titan arena, Mount Olympus and never-before-seen challenges alongside returning favorites.

Host and Executive Producer Dwayne Johnson said, “this season of ‘The Titan Games’ is going to be even bigger than last season. We created an incredible new Titan arena with new insane challenges, and we’ve gone out and selected some of the fiercest competitors we’ve ever seen. For the first time ever, our everyday Titans will go head to head with elite athletes from the Olympics, NFL, UFC and beyond to compete for Titan glory. All of these men and women are true athletes and competitors who give it their all in the Titan arena.”

This season, the competition breaks down into three regional brackets: West, Central and East. Within each region, one male and one female professional athlete will serve as Titans. Each episode during regional competition will see two contenders of each gender battle in a best-of-three competition on epic new and fan-favorite obstacles. They are fighting for the chance to compete on Mount Olympus, Johnson’s all-encompassing final obstacle that tests strength, speed, stamina and heart. In order to become a Titan, the competitors will need to defeat one of Johnson’s professional Titans and then maintain that position on top of Mount Olympus.

Those who lose on Mt. Olympus will have a shot at redemption during the Regional Finals and one last chance to take on the reigning Titan. Ultimately, one male and one female will earn the title of Regional Champion and move on the finale.

In the finale, the reigning Titans will return to battle against one another, with one man and one woman emerging as Titan Champion and each winning a grand prize of $100,000. If one of the professional athletes wins, their prize money will go to a charity of their choosing.

Inspired by Johnson’s desire to motivate global audiences to achieve their greatness, this unparalleled athletic competition gives men and women across the country the opportunity to step inside the Titan arena and push beyond their limits. Premiering Monday, May 25 “The Titan Games” will give audiences their much-needed dose of high-level competitive sports during these unprecedented times.

For more information on The Titan Games Season 2 Celebrity Titans, please see below.

CLARESSA SHIELDS
Hailing from Flint, Mich., Shields had a tough upbringing and grew up in poverty – her mother abused alcohol and her father in prison until she was 9 years old. When her father returned home, they reconnected and he told her that if he had stuck to what he was passionate about, he wouldn’t have ended up in prison. His passion: Boxing. Shields first stepped into the ring at 11 years old and found solace in the sport, helping her overcome seemingly insurmountable childhood challenges.

Shields dedication led to her first ‘Olympic appearance when she was only 17. She took home the gold medal that year. Four years later, she did it again. To date, she is the most accomplished amateur boxer in U.S. history – male or female – and the only American boxer to capture back-to-back gold medals at the Olympic Games.

A trailblazer for women’s boxing, she headlined the first women’s boxing main event on premium television (Showtime) in just her second professional fight and has headlined premium television fight cards a record six times. Outside of the ring she has received numerous awards and recognitions, including 2017 Female Fighter of the Year by USA Today, 2017 Nickelodeon Kids’ Choice Sports Award winner for “Biggest Powerhouse,” Sports Illustrated’s Fittest 50 2020 and more.

JOE THOMAS
A future first-ballot Hall of Famer, Joe Thomas has cemented himself as one most accomplished and most decorated athletes to ever step foot on an NFL football field.

Selected third overall by the Cleveland Browns in the 2007 NFL Draft, Thomas became one of just five players in NFL history to be selected to the Pro Bowl in each of his first 10 seasons. His 10,363 consecutive snaps played is the longest streak in history. Thomas was also the only player in team history to earn the Cleveland Browns’ Walter Payton Man of the Year award multiple times (2010, 2012, 2016). Prior to joining the Browns, Thomas was an All-American at the University of Wisconsin, earning honors as the nation’s best interior lineman. Following an injury, and after an illustrious 11-year NFL career, the NFL ironman decided to retire from the league.

Upon retirement, Thomas joined NFL Network as a pre- and post-game analyst for Thursday Night Football, as well as NFL Network’s extensive coverage of such events as Super Bowl and the NFL Draft. In addition to his NFL Network duties, Thomas hosts a successful weekly podcast on the UNINTERRUPTED Podcast Network titled “The ThomaHawk Show,” where he and former teammate Andrew Hawkins provide entertaining insight on an array of NFL stories, topics and comedic banter. A Brookfield, Wisconsin native, Joe, wife Annie and their four children reside in Madison, WI.

VICTOR CRUZ
Victor Cruz is a co-host of E!’s “Pop of the Morning,” an hourlong program that offers viewers an unfiltered, in-depth and irreverent look at the most talked about news stories of the day. As a former New York Giants player and NFL Super Bowl champion from Paterson, N.J., football was always Cruz’s first love. Off the field, Cruz is recognized as a fashion icon and tastemaker. In 2014 he was named on Vanity Fair’s International Best Dressed List and has also been featured in GQ, AQ and Vogue magazines. In 2016 he was also recognized by Sports Illustrated as the most fashionable athlete and released the Air Trainer Cruz, being the first athlete to design and release a lifestyle shoe with Nike. Cruz also devotes his time to numerous causes and is an active philanthropist. He launched the Victor Cruz Foundation in 2014, which encourages children to become physically active, focuses on college readiness, financial literacy, and STEM programming. Since Cruz officially retired from the NFL, he has also served as an ESPN NFL analyst.

HANNAH TETER
A native of Belmont, Vt., Teter was born into a snowboarding family. She is the youngest of five siblings and two of her four older brothers, Abe and Elijah, have competed for the U.S. Snowboard team. At age 8, she started snowboarding and by 2002, at age 15, she had become the World Junior Halfpipe Champion.

Teter competed in seven World Cup events from 2002-04 with four victories, including her first Winter X Games appearance in 2003. She went on to become a nine-time X Games medalist – six individual and three unified dual slalom.

Coming off an injury in 2005, Teter was unsure of how she would be able to compete in the 2006 Olympics in Turn, Italy. Ultimately, she persevered and went on to win the gold medal in halfpipe competition that year. Her accomplishment also received recognition from the United States Olympic Committee who named her the USOC SportsWoman of the Year. In addition, she won the ESPY Award for Best Action Sports Female in 2006. Four years later at the winter Olympics in Vancouver, B.C., Teter took home the silver medal in halfpipe competition. Later that year she received VH1’s Do Something Award for Athlete of the Year.

Off the mountain, Teter serves as the Special Olympics Global Ambassador and is also involved in charity work, founding two philanthropic business ventures: Hannah's Gold and Sweet Cheeks, which helps the less fortunate. Hannah’s Gold has raised nearly $200,000 for an impoverished village in Kenya and her line of underwear, Sweet Cheeks – Panties with a Purpose, raises funds for the charity partner Children International, which helps aid children living in extreme poverty.

JESSIE GRAFF
One of the top competitors on NBC’s “American Ninja Warrior,” Jessie Graff is quickly becoming known as a modern-day Wonder Woman, breaking stereotypes as she continues to break records. Graff was a national sensation and breaking news phenomenon in 2016, when she became the first woman to complete stage 1 in the “American Ninja Warrior” Las Vegas national finals. She’s the first woman to clear Stage 2 in both “American Ninja Warrior” and “Sasuke” (the original Japanese Ninja Warrior). Known for her superhero outfits and continued history of record breaking, she has ranked among the top 6 overall competitors in all of the past five regional competitions, making her the only woman to qualify among the men for national finals five years in a row.

Graff attributes much of her success on the seemingly impossible obstacles of “American Ninja Warrior” to her decade-long career in stunts. Awarded the Action Icon Award for Stuntwoman of the Year, her credits include “Wonder Woman,” “Bright,” “G.I. Joe,” “Transformers,” “Die Hard” and “The Dark Knight” as well as being a recurring double on “Supergirl,” “Futureman,” “Agents of S.H.I.E.L.D,” “Leverage” and many more. Graff has a black belt in Tae Kwon Do and Kung Fu, with extensive training in countless other styles of martial arts, high falls, wipeouts, sky diving, motorcycles, stunt driving, fire, wirework and flying trapeze. Graff also broke the pole-vault record at Georgia Tech (where she majored in aerospace engineering) and the University of Nebraska (where she earned her degree in theater) and was 1.5 inches away from qualifying for the 2004 Olympic trials in the sport.

TYRON WOODLEY
A native from the great cultural garden of the Midwest, Tyron Woodley calls the neighborhood of Ferguson, Mo., home. Growing up, he was primarily raised by his mother and it was a daily struggle to survive. To avoid a life of crime, Woodley dedicated himself to academic and athletic excellence. While in high school, he refused to become another victim of the stereotype of his environment and went on to become a two-time All-American wrestler and consistent honor roll student. He continued to attend the University of Missouri, where he became the first Big 12 champion in the recorded history of the school and was also recognized as a two-time All-American wrestler.

After college, Woodley launched into a career in mixed martial arts with the Strikeforce organization where he exploded onto the circuit with an impressive 7-0 record. All of his bouts ended by either a knockout or his opponent’s submission. In 2013 Woodley made his Ultimate Fighting Championship (UFC) debut and quickly worked his way up the cards. In 2016 he landed a welterweight championship bout against Robbie Lawler that he won in decisive fashion with a knockout halfway through the first round, the quickest victory in welterweight championship history. Woodley went on to successfully defend his belt four times – twice against Steven “Wonderboy” Thompson, vs. Damian Mia and vs. Darren Till.

Outside of the MMA, Woodley enjoys a life filled with excitement while raising his four children and has had several television and film roles. His recent credits include “Olympus Has Fallen,” “Agent of S.H.I.E.LD,” “Sons of Anarchy,” Player,” the box office hit film “Straight Outta Compton,” “Steve Harvey’s Celebrity Feud,” “Hawaii Five-0” and “S.WA.T.” In addition, Woodley hosts the weekly TMZ show “The Hollywood Beatdown,” regularly appears as a commentator on UFC, on FOX, and has recently secured a sports analyst and commentator position with ESPN.