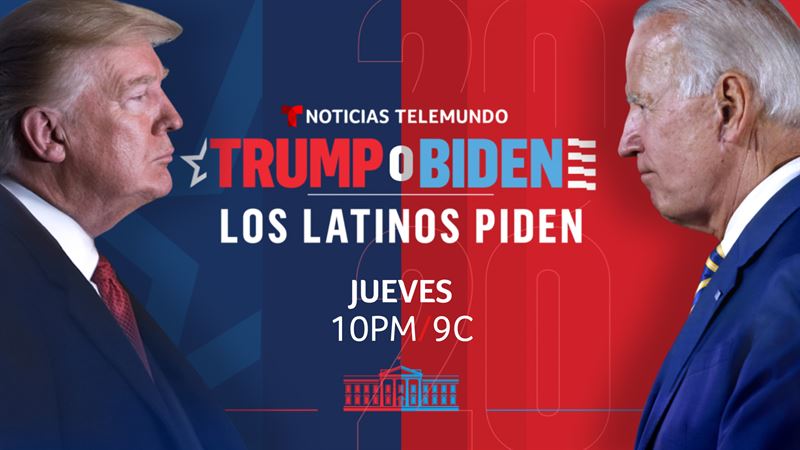 WHAT: With less than three weeks until Election Day, Noticias Telemundo presents a live one-hour special, ‘TRUMP O BIDEN: LOS LATINOS PIDEN’, to examine the state of play of the Latino vote. The special will focus on what is motivating Latino voters as the election draws near and explore the key issues resonating with Hispanics from the economy to the coronavirus pandemic to immigration. The special will also include the latest polls and a breakdown and analysis of key congressional races.

Joining Noticias Telemundo’s coverage will be an on-air political analyst team of Victoria DeFrancesco Soto (assistant dean for civic engagement and a lecturer at the LBJ School of Public Affairs of Texas at Austin), Alfonso Aguilar (president of Latino Partnership for Conservative Principles) and Clarissa Martinez (vice president of policy and advocacy at UnidosUS).

Continue to follow Noticias Telemundo’s coverage of the 2020 election across all of its platforms with the latest news, information and resources including:

The news special is a part of Telemundo’s Decision 2020 initiative, a non-partisan multiplatform news and civic engagement effort aimed at providing Latinos with comprehensive news, information and resources on the 2020 election. Telemundo’s dedicated landing page for Decision 2020 can be found here.