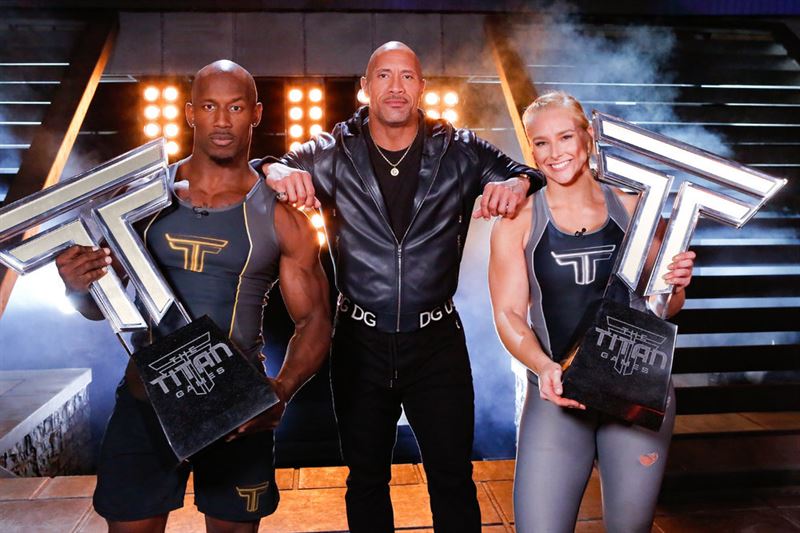 UNIVERSAL CITY, Calif. – Feb. 28, 2019 – After competing among a field of elite athletes in an unparalleled athletic competition, James Jean-Louis and Charity Witt have been named the first male and female Titan Champions, respectively, on NBC’s “The Titan Games.”

The series, hosted and executive produced by Dwayne Johnson, along with executive producers Arthur Smith and Dany Garcia, was inspired by Johnson’s desire to motivate global audiences to reach their potential for greatness.

Throughout this uplifting series, competitors pushed their bodies to the limit by battling opponents in unforgiving head-to-head challenge that tested speed, strength, agility and endurance as well as mental and emotional fortitude.

“James and Charity perfectly embody the spirit of ‘The Titan Games,’ which is about giving people from all walks of life the platform to showcase their amazing strength and perseverance under a global spotlight,” Johnson said. “I’m inspired by our two Titan champions, who overcame incredible obstacles to make us all stand up and cheer throughout this epic inaugural season.”

Jean-Louis, 30, a hardworking single father and beer truck driver, entered the competition eager to show his son Semaj that he can accomplish anything. After a troubled upbringing, fitness became his way to focus on something positive. Jean-Louis fought his way through “The Titan Games” by battling it out in Hammering Ram, Atlas Smash, Uprising and two grueling runs on Mt. Olympus.

Witt, 26, was diagnosed with cardiac arrhythmia at age 17 and quickly adapted to overcoming adversity. Her tenacious personality and understanding of hard work fueled her passion for powerlifting and her career as a metabolic technician. Her motto – “I don’t quit when I’m tired, I quit when I’m done” – inspired her to join “The Titan Games.” Throughout the series she competed in challenges Heavy Metal, Herculean Pull, and Uprising, and dominated two battles on Mt. Olympus.

Launched in 2016, Universal Television Alternative Studio is a leading supplier of hit unscripted content and alternative formats, and creates, develops and produces a diverse slate of original series domestically and internationally. The studio’s most recent breakout hits include athletic competition show “The Titan Games,” starring and executive produced by Dwayne Johnson; “Making It,” from executive producers Amy Poehler and Nick Offerman; and the #1 new series of 2017, “World of Dance,” starring and executive produced by Jennifer Lopez. Additionally, the studio is responsible for the high-stakes game show “The Wall,” which has been sold into 27 territories internationally and has become the highest-rated game show in multiple territories around the world. Hosted by Emmy Award winner Jane Lynch, "Hollywood Game Night” has been remade across 21 territories and recently completed production on its sixth season. Last year the studio debuted “In Search Of” with Zachary Quinto for History. Upcoming series include the songwriting competition series “Songland” from executive producers Adam Levine, Dave Stewart and Audrey Morrisey and the comedy competition series “Bring the Funny,” starring judges Kenan Thompson, Chrissy Teigen and Jeff Foxworthy with host Amanda Seales. Universal Television Alternative Studio is a division of NBCUniversal.

A. SMITH & CO. PRODUCTIONS
A. Smith & Co. Productions creates some of the most innovative, highly rated and high-quality programming for the domestic and international television marketplace. The company has produced more than 4,500 hours of award-winning programming with budgets totaling well over $1 billion across more than 50 networks and platforms. Current productions include “The Titan Games,” “American Ninja Warrior,” “American Ninja Warrior Junior,” "American Ninja Warrior: Ninja vs. Ninja,” “Hell’s Kitchen,” “Mental Samurai,” “Unsung,” “Inside the Label,” “SciJinks,” “NFL Pro Bowl Skills Showdown,” “The Dunk King” and “Death by Magic.” For more information, visit www.asmithco.com.