MORE THAN 60% OF LATINOS PLAN TO VOTE IN PERSON 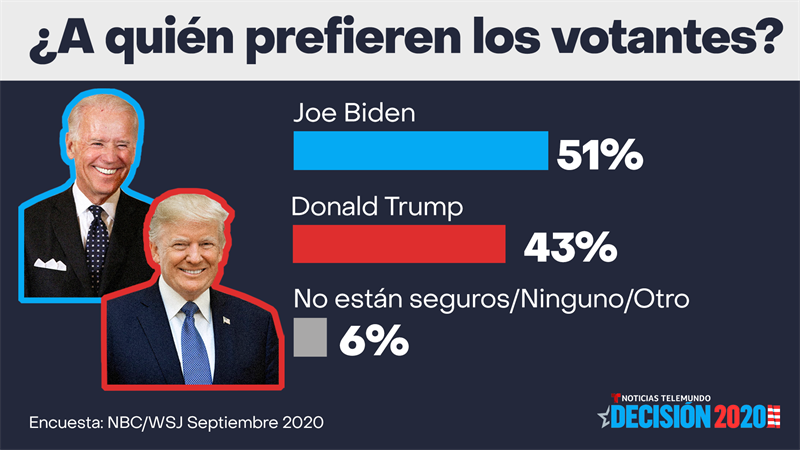 The nationwide poll was conducted as part of Telemundo’s “Decision 2020” initiative, a non-partisan multiplatform news and civic engagement effort to provide Latinos with comprehensive information and resources on this year’s election. The poll is the latest in a yearlong series of Telemundo local and national surveys focused on the Latino electorate.

A story about the results of the NBC News/Wall Street Journal/Telemundo poll is available in Spanish at Telemundo.com. Highlights of the results will also be featured on Noticias Telemundo’s Sunday newscasts at 6:30 p.m EDT/5:30 pm CT and 11:30 p.m. EDT/10:30 CT.

Some of the key findings include:

Earlier this month, Telemundo released a study examining a wide range of political and social views of young Latinos. The study, launched in partnership with BuzzFeed News, includes a national survey of registered Latino voters aged 18 to 34 and can be accessed here.

NBCUniversal Telemundo Enterprises is a world-class media company leading the industry in the production and distribution of high-quality Spanish-language content to U.S. Hispanics and audiences around the world. This fast-growing multiplatform portfolio is comprised of the Telemundo Network and Station Group, Telemundo Deportes, Telemundo Global Studios, Universo, and a Revenue Strategy & Innovation unit. Telemundo Network features original Spanish-language entertainment, news, and sports content reaching 94% of U.S. Hispanic TV households in 210 markets through 30 local stations, 50 affiliates, and its national feed. Telemundo also owns WKAQ, a television station that serves viewers in Puerto Rico. Telemundo Deportes is the designated Spanish-language home of two of the world’s most popular sporting events: FIFA World Cup™ through 2026 and the Summer Olympic Games through 2032. Telemundo Global Studios is the company’s domestic and international scripted production unit, including Telemundo Studios, Telemundo International Studios, Telemundo International, Underground Producciones, an internationally renowned production boutique based in Argentina as well as all of the company’s co-production partnerships. As the #1 media company reaching Hispanics and millennials online, the Revenue Strategy & Innovation unit distributes original content across multiple platforms, maximizing its exclusive partnerships with properties such as BuzzFeed, Vox, and Snapchat. Through Telemundo Internacional, the largest U.S.-based distributor of Spanish-language content in the world; and Universo, the company reflects the diverse lifestyle, cultural experience, and language of its expanding audience. NBCUniversal Telemundo Enterprises is a division of NBCUniversal, a subsidiary of Comcast Corporation.