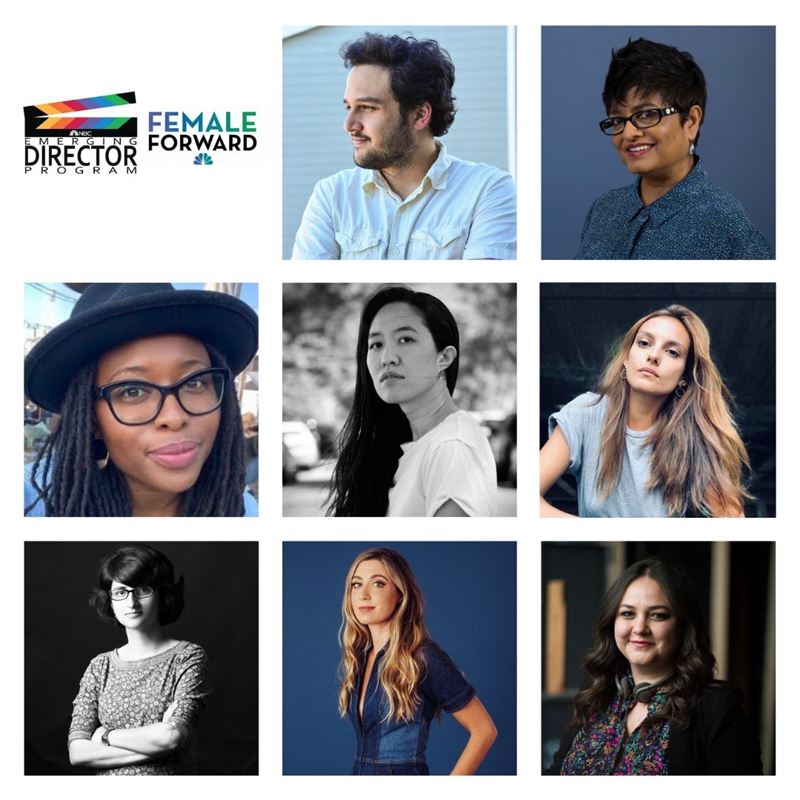 UNIVERSAL CITY, Calif. – Oct. 22, 2020 – NBCUniversal has unveiled the 2020-21 classes of its groundbreaking scripted directing initiatives, Female Forward and the Emerging Director Program. The two programs aim to increase representation of female and ethnically diverse male and non-binary directors, respectively, by creating a pipeline into scripted television.

Both initiatives remain unique within the industry in that they are the only network programs to guarantee that participating directors will helm an episode of primetime television by the conclusion of the program. Program directors shadow on up to two episodes of their assigned NBC scripted series before receiving an in-season assignment to helm an episode of the same series.

“Creating a unified brand for all of our directing initiatives is the first step in creating a clear and expansive approach to representation in the director’s chair across NBCUniversal’s film, television and streaming platforms. By sharing resources across NBCUniversal’s vast portfolio, we have a great opportunity to build on the successes of our current film and television programs, expand their reach and exponentially increase impact in our company and across the industry,” said Jones-Clark.

The new class of Female Forward directors and the NBC series they are set to direct are Maureen Bharoocha (“Superstore”), Lara Everly (“Good Girls”), Jean Lee (“New Amsterdam”), Kantú Lentz (“Chicago Fire”), Afia Nathaniel (“Chicago Med”), Kay Oyegun (“This Is Us”) and Pratibha Parmar (“Law & Order: SVU”). Juan Avella will direct an episode of “The Blacklist” as part of the Emerging Director Program.

Collectively, achievements from this group of directors include produced credits for HBO and BBC, as well as official selections and honors at the Tribeca Film Festival, the Toronto International Film Festival and South by Southwest (SXSW). They have been recognized on top industry lists including The Black List and Indiewire’s “Rising Female Directors of 2020.”

Due to current production constraints and safety protocols, it has yet to be determined whether all the directors will be able to shadow and direct on their respective shows this season. If they are not able to safely fulfill the program curriculum this season, they will shadow and direct an episode on an NBC scripted series in the 2021-22 season.

“While the format of our directing programs has shifted to accommodate these unique circumstances, our commitment to giving underrepresented voices their time in the director’s chair has not wavered,” said Lisa Katz and Tracey Pakosta, Co-Presidents, Scripted Programming, NBC Entertainment. “We are thrilled to usher in this latest cohort of directors and are excited to see them add to the rich legacies both programs have established.”

The programs’ annual workshops kicked off with a series of virtual sessions in partnership with the Alliance of Women Directors. They are designed to enhance the directors’ experiences in the program, covering topics ranging from time management when on set to personal branding and working with actors. This year the workshops kicked off with Glatter and will continue with sought-after directors, producers and industry professionals – several of whom are program alumni and advisory council members – including Nisha Ganatra, David Hyman, Julie Anne Robinson, Sunday Stevens, Yasu Tanida, Valerie Weiss and Jason Winer.

This marks the third year of Female Forward, which aims to achieve gender parity in the director’s chair. After launching in 2018, the program celebrated a memorable milestone last year when eight members of its inaugural class were invited back to direct additional episodes of NBC shows, including “The Blacklist,” “Chicago Fire,” “Good Girls” and “Superstore.” Their talents have also been utilitzed across the industry on episodes of Netflix’s “The Babysitter’s Club,” Fox’s “Prodigal Son” and Peacock’s upcoming “Saved By the Bell.” Notably, Kim Nguyen, from the second class, directed an episode of “Fresh Off the Boat” soon after completing the program and, Livi Newman, an alumna of the inaugural class, was recently tapped to direct the upcoming film adaptation of the best-selling novel “Where the Crawdads Sing.”

To be eligible for either Female Forward or the Emerging Director Program, finalists are required to have directing experience in their respective fields of expertise, including feature films, music videos, commercials, digital content and theater. Candidates can have no more than one scripted television directing credit.

ABOUT GLOBAL TALENT DEVELOPMENT & INCLUSION (GTDI)
First established in 2017 as a groundbreaking diversity and inclusion department for the feature film industry by Universal Filmed Entertainment Group Chairman Donna Langley, GTDI expanded its purview in 2020 to add NBCUniversal Television & Streaming and Universal Studio Group. NBC and Universal Television’s longstanding Talent Infusion Programs which have launched the careers of acclaimed producers, writers, directors and actors in the industry over the past 20 years as well as Universal Content Productions (UCP) initiatives and incubator programs were among those added to the group’s oversight. Building upon NBCUniversal’s commitment to a diverse, equitable and inclusive culture, GTDI partners with Production and Human Resources departments across the Company’s content ecosystem to create strategies that align with its mission to cultivate, amplify, attract and retain an inclusive talent pool on-screen, behind the camera, and within the NBCUniversal’s workforce.