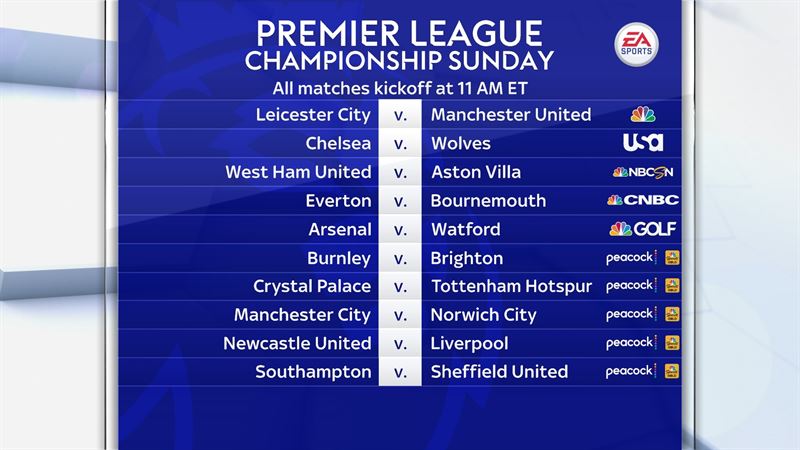 At the bottom of the table, three clubs are trying to fight off relegation. With two of the bottom three spots left to be filled, only one of Aston Villa (at West Ham on NBCSN), Watford (at Arsenal on GOLF Channel) and Bournemouth (at Everton on CNBC) will remain in the Premier League next season.

Liverpool last month won their first-ever Premier League title and first top-flight title in 30 years. The Reds lifted the Premier League trophy yesterday at Anfield after Liverpool outlasted a superb Pulisic and Chelsea in a thrilling 5-3 win. Liverpool have now won 19 top-flight titles; only Manchester United have won more with 20. The Reds finish their season at Newcastle on Sunday, with live coverage streamed exclusively on Peacock and NBC Sports Gold.

Following are the networks and announcers for “Championship Sunday,” (live, Sunday at 11 a.m. ET):

Lowe, Earle, and Mustoe will follow the matches with an extended three hours of Goal Zone season wrap-up coverage, beginning on NBC and NBCSN at 1 p.m. ET, and continuing for the final 90 minutes at 2:30 p.m. ET on NBCSN. The shows will include emotional scenes from around the grounds, key highlights, and interviews from the final day of the season.

NBCSN airs a presentation of the documentary Premier League Download: Klopp’s Promise this Saturday at 9:30 a.m. ET. Narrated by Roger Bennett, the show highlights Liverpool’s journey in the nearly five years under manager Jurgen Klopp, from winning the Champions League, to closing in on their first league title in 30 years, to having to wait for that title until last month due to the season being suspended and concluding with yesterday’s trophy lift at Anfield.

Robbie Earle and Robbie Mustoe discuss and dissect the top Premier League storylines after every match day on “The 2 Robbies” podcast. On the latest episode, the Robbies discuss an eventful finish to the penultimate round of matches in the 2019-20 Premier League season, which saw Liverpool finally get to lift that long-awaited Premier League trophy after a 5-3 thriller against Chelsea at Anfield. Plus, thoughts on how the final day of the top-four race is shaping up after Manchester United's 1-1 draw with West Ham and analysis on the fight for Premier League survival between Aston Villa, Watford, and Bournemouth. On their next episode, which will be released this Sunday, Earle and Mustoe will have instant analysis on the results of “Championship Sunday.”

Premier League games will be streamed on NBCSports.com and the NBC Sports app — NBC Sports Group’s live streaming product for desktops, mobile devices, tablets, and connected TVs. Coverage will be streamed via “TV Everywhere,” giving consumers additional value for their subscription service, and making high quality content available to MVPD customers both in and out of the home and on multiple platforms. The NBC Sports app is available on the iTunes App Store, Google Play, Roku Channel Store, Apple TV and Amazon Fire.

Following is NBCUniversal’s Premier League match schedule for this weekend (all times ET, subject to change):