MSNBC Legal Analyst Chuck Rosenberg returns as host for the fourth season of “The Oath,” a podcast about the men and women who have taken an oath to serve their country

Robert Mueller: “Your first thought, thanks to the Marine Corps, is ‘how do I keep my men safe?’ I was there to take care of our men.” 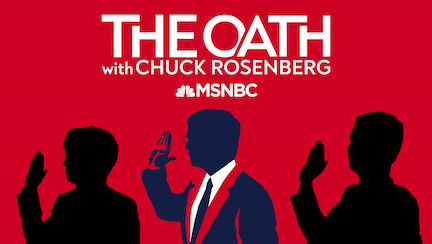 December 2, 2020 – Today MSNBC will launch season four of The Oath with Chuck Rosenberg – a weekly, original podcast hosted by Chuck Rosenberg – MSNBC legal analyst and former US Attorney, federal prosecutor, senior FBI official and acting head of the DEA. The show is a series of revealing conversations with fascinating men and women who took an oath to support and defend the Constitution of the United States. The conversations are civil and thoughtful and avoid politics and partisanship. The series has reached #1 on Apple podcasts and has been downloaded more than seven million times.

In the season’s premiere episode, Chuck speaks with former FBI Director Robert Mueller, who discusses his upbringing, why he volunteered for service in Vietnam, his rigorous Marine Corps training, his command of a rifle platoon in the Demilitarized Zone, his dedication to the Marines he led, and - with death all around him - his efforts to help his men survive the war and return safely to the United States. The interview with Mueller, who was awarded a Bronze Star with Valor and a Purple Heart for his service in Vietnam, is in two parts; part one at the beginning of the season and part two at the end. The second part will cover Mueller’s tenure as the sixth Director of the FBI, which began just days before 9/11, and his efforts to protect the United States from another catastrophic terrorist attack. This interview with Bob Mueller is the only full one he has given since leaving public life, and it may be the only full one he gives.

The conversations explore what shaped these leaders, dilemmas they encountered and overcame and what keeps them up at night. The captivating and apolitical discussions give the listener an intimate look at their lives, their successes and failures and what drew them to public service. Each episode is thoughtful and provocative, with a healthy dose of humility and humor mixed in.

NBC News and MSNBC have released several new, original and chart-topping podcasts, including Bag Man with Rachel Maddow, Dateline’s The Thing About Pam and Motive for Murder, Do No Harm and of course The Oath with Chuck Rosenberg. All original podcasts and showcasts are available via Apple Podcasts, Google Podcasts, Spotify, TuneIn and more. NBC News is a top 10 podcast publisher in the Podtrac monthly rankings.