A Special Edition of the Network’s Morning Show ‘Un Nuevo Dia’ Will Kick Off Inauguration Coverage on Wednesday at 7 a.m. ET 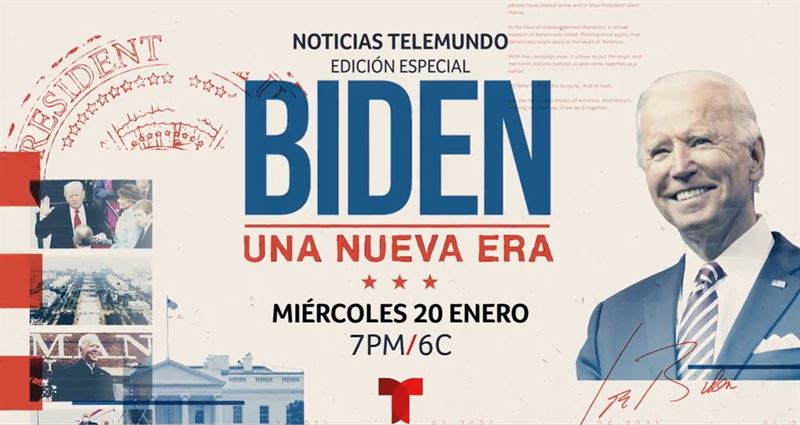 MIAMI – January 18, 2021 – Noticias Telemundo will offer multiplatform coverage of the inauguration of President-elect Joseph Biden and Vice President-elect Kamala Harris on Wednesday, January 20, anchored live from Washington D.C. and featuring over 12 hours of news and information including a coast-to-coast broadcast, a one-hour evening news special and special digital content.

Noticias Telemundo’s anchors, correspondents and digital reporters will be joined by a team of political analysts and commentators to provide on-the-ground updates and reporting plus in-depth analysis on the day’s events.

The network’s on-air and digital coverage will feature reactions and commentary from Hispanics across the United States and examine critical issues of interest to Latinos, including the coronavirus pandemic, the economy, immigration, among others.

Felicidad Aveleyra and Paulina Sodi will anchor from Telemundo Center studios in Miami.

Noticias Telemundo’s digital news team will provide multimedia content throughout the day with real-time updates, a live blog and other original online reporting.