The Comprehensive Coverage Wraps up Telemundo’s “Decision 2020,” a Non-partisan Multiplatform News and Civic Engagement Initiative Aimed at Informing and Engaging Latinos During the 2020 Election 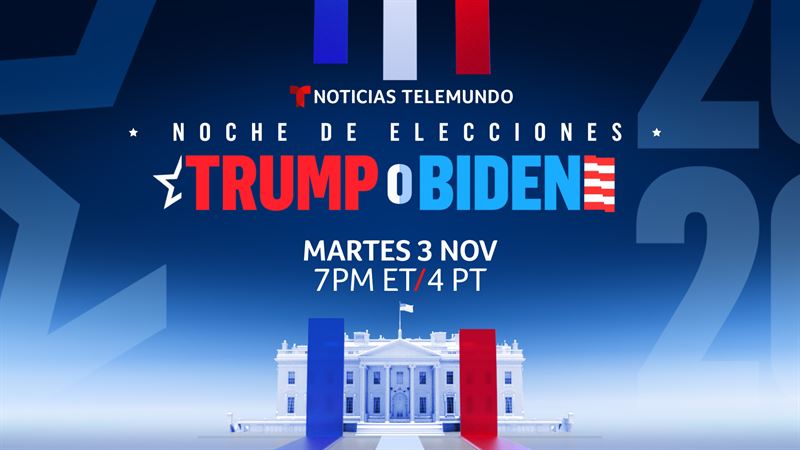 “During this critical time for the Hispanic community, we are deeply committed to providing our viewers with information that is rigorous, reliable and factual,” said Luis Fernandez, president of Telemundo Network News. “The Noticias Telemundo news team has been delivering insightful coverage throughout the entire campaign by focusing on the issues that matter most to Latinos. On Election Day, the strength of our reporting team will be enhanced by state-of-the-art technology and visual storytelling tools to keep our audience informed minute-by-minute about the latest developments in this historic election.”

Telemundo plans to release several polls offering the latest snapshots of the Latino vote in the run-up to Election Day. On Thursday, Telemundo will release new polls on the Latino vote in several key states including Arizona, Florida, Nevada and Texas. A NBC News/Wall Street Journal/Telemundo national poll with a Latino oversample will be released on Sunday.

Telemundo Center will serve as the nerve center for Noticias Telemundo’s multiplatform coverage. As Election Day approaches, the building will be lit up in the colors of red, white and blue. Noticias Telemundo will utilize the latest technology to offer an array of visual components on election night, including augmented graphics, high-resolution video walls and a multi-touch screen to show the latest polling and results. An augmented reality display will help viewers track the state of play of the presidential race and Senate and House races. In addition, a special social media set will show viewers the Election Day online conversations taking place across social media platforms.

To provide up-to-date exit polling and election night results, Noticias Telemundo will work in close collaboration with its sister network, NBC News. The NBC News Decision Desk provides real-time accurate election results as soon as they are made available by election officials.

● Fact checks by T Verifica, Noticias Telemundo’s new fact-checking platform which will be providing fact checks on NoticiasTelemundo.com and on air. Viewers can also follow fact checks in Spanish and English through Telemundo’s chatbot on WhatsApp by adding the number +1 727 477 2212 and typing “Hola” or “Hello” in their first message, or via hi.factchat.me

The comprehensive coverage is part of Telemundo’s “Decision 2020” initiative, a yearlong non-partisan multiplatform news and civic engagement effort aimed at providing Latinos with comprehensive news, information and resources on the 2020 election.

The initiative has featured expanded news coverage, virtual town halls and online voter registration drives with national and local organizations to support Latinos during this year’s election cycle, plus a series of Telemundo local and national surveys focused on the Latino electorate. Last month, Telemundo released a study examining a wide range of political and social views of young Latinos. The study, launched in partnership with BuzzFeed News, included a national survey of registered Latino voters aged 18 to 34 and can be accessed here.

Telemundo’s dedicated landing page for Decision 2020 can be found at https://www.telemundo.com/noticias/elecciones-2020