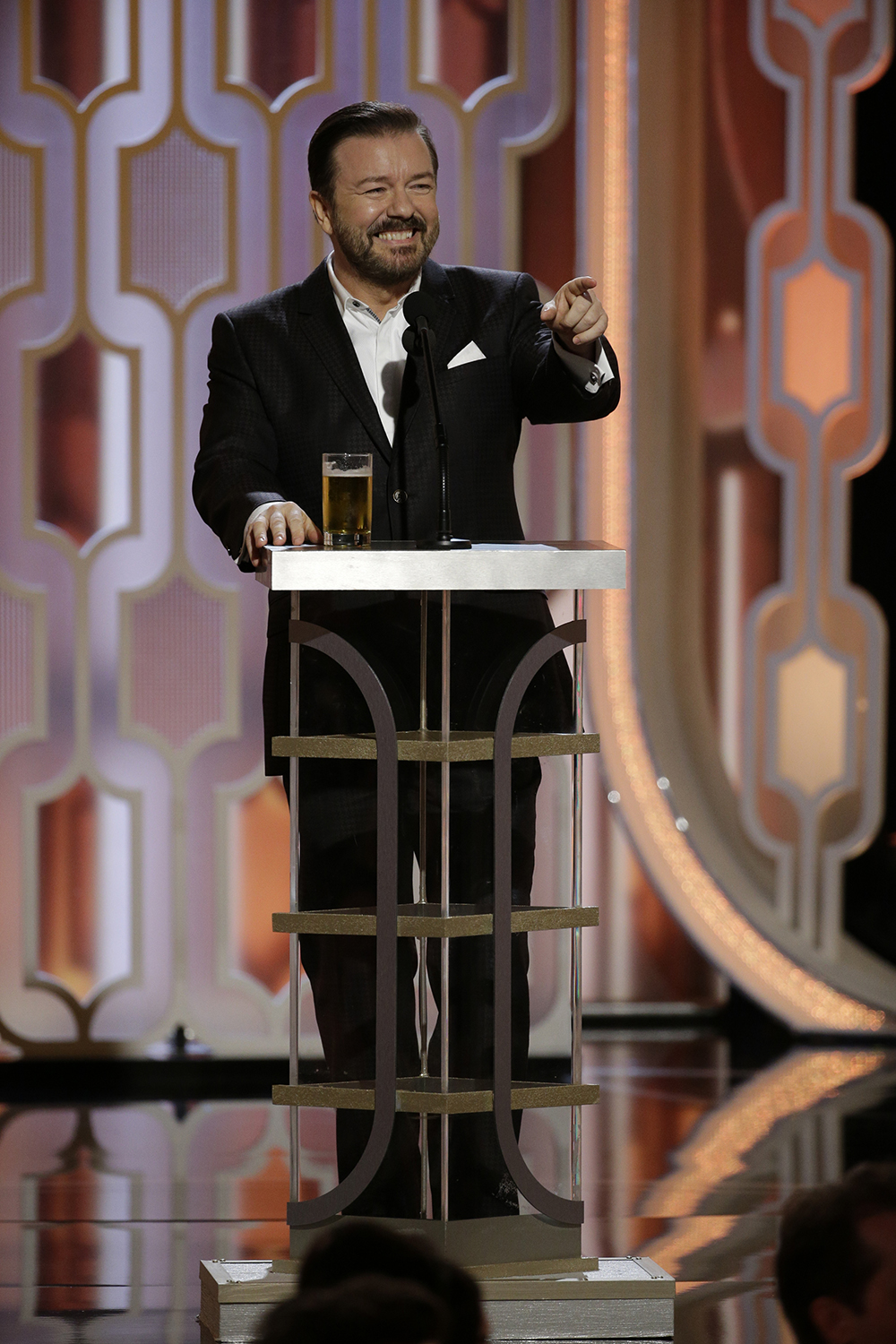 The Golden Globes serve as the official kickoff to the 2020 awards season. 25 categories — 14 in film and 11 in television — are voted on by the Hollywood Foreign Press Association (HFPA).

“Once again, they've made me an offer I can’t refuse. But this is the very last time I’m doing this, which could make for a fun evening,” said Gervais.

“There is always a palpable electricity in the room when Ricky takes the Globes stage. His return as master of ceremonies at the Golden Globes is much anticipated,” said Paul Telegdy, Chairman, NBC Entertainment. “It is sure to make for an unexpected evening. We can’t wait to see what he has up his sleeve.”

“When Ricky Gervais is at the helm of the Golden Globes Awards, we can always expect the unexpected,” said President of the HFPA Lorenzo Soria. “We’re excited to see it all unfold on Jan. 5!”

“In a world where many award shows are opting to go the no host route, the Golden Globes are going all in! It’s going to be a great night,” added Mike Mahan, CEO, dick clark productions.

Last January’s NBC telecast of “The 76th Annual Golden Globe Awards” averaged 18.6 million viewers in “live plus same day” Nielsens, delivering the biggest audience for a primetime telecast, excluding news and sports, in 10 months, since the prior March’s Academy Awards. The Jan. 6 “Golden Globes” coverage also generated a year-to-year increase in the key adults 18-49 demographic, with a 5.2 rating vs. a 5.0. That 5.2 more than quadrupled NBC’s non-sports 18-49 average in the timeslot the previous season and the audience of 18.6 million was up 13.5 million persons versus the prior season’s average.

Considered the most influential British comedian since Charlie Chaplin, Gervais is an award-winning stand-up comedian, with five international tours to date. His live stand up show “Fame” became the fastest selling UK stand-up show in history.

Gervais can most recently be seen in the dark comedy “After Life,” which he created, directs, stars in and executive produced. The series premiered March 8 worldwide on Netflix and will return for a second season in 2020.

In 2017, Gervais toured worldwide with his first stand-up special in seven years. “Humanity,” which was also recorded as a Netflix special, takes aim at human behavior with his trademark wit. He recently embarked on his follow up tour, “SuperNature,” which will also be released on Netflix.

Gervais is featured in the Guinness Book of World Records for having the most downloaded Internet show of all time. He was named in Time magazine’s 100 Most Influential People in the World and awarded the Sir Peter Ustinov Comedy Award from the Banff World Television Festival.

The Golden Globe Awards, often referred to as “Hollywood’s Party of the Year,” is one of the biggest nights on the calendar for live viewing. It’s also one of the few awards shows that combine the honorees of both film and television. The 2019 Golden Globe Awards telecast averaged a 5.2 rating in adults 18-49 and 18.6 million viewers, according to Nielsen Media Research.

The Hollywood Foreign Press Association (HFPA) was founded in 1943 – then known as the Hollywood Foreign Correspondents Association – by a group of entertainment journalists based in Los Angeles. During World War II, the non-profit organization established a cultural bridge between Tinseltown and millions of cinema fans around the world who demanded drama and inspiration through entertainment. The HFPA continues to do so today with a membership representing more than 55 countries. Since 1944, the group has hosted the annual Golden Globe® Awards – the premier ceremony which honors achievements in both television and film. The licensing fees from the Golden Globe® Awards has enabled the organization to donate more than $37.5 million to more than 70 entertainment-related charities, film restoration, scholarship programs and humanitarian efforts over the last 25 years. For more information, please visitwww.GoldenGlobes.com and follow us on Twitter (@GoldenGlobes), Instagram (@GoldenGlobes), and Facebook (www.facebook.com/GoldenGlobes).