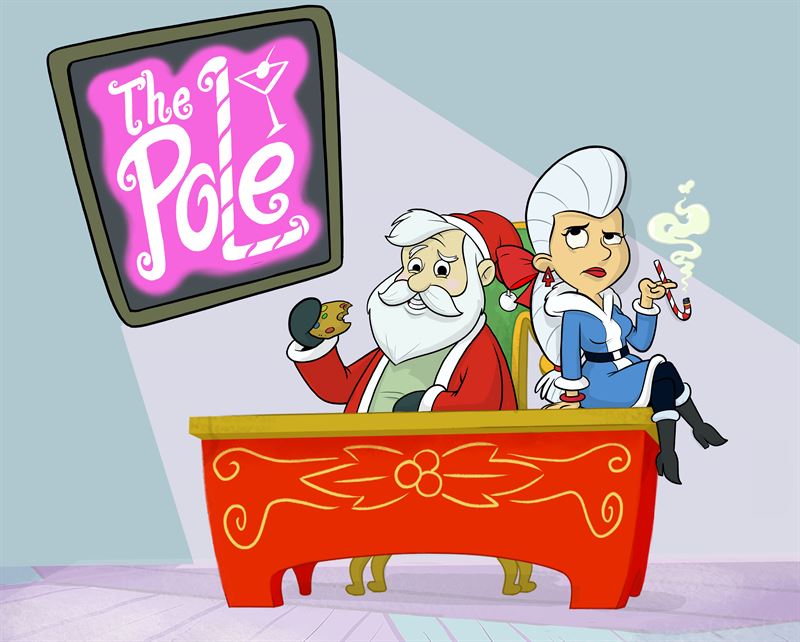 NEW YORK, NY -- September 22, 2020 -- Christmas is coming early for SYFY’s late-night adult animation block, TZGZ. The network made a list, checked it twice… and today announced that the irreverent and edgy animated comedy THE POLE, starring Bobby Moynihan and Jillian Bell, has been added to the “nice list” with a 6-episode series pickup.

In THE POLE, after a scandal involving “Saint” Nick (Moynihan) rocks the holly jolly foundations of the North Pole, all hell breaks loose as the future of Christmas turns into a twisted power struggle for the Red Suit. As Nick, the 20th to wear the Suit, struggles with the age-old question of naughty vs. nice, his wife Mrs. Claus, aka Gretchen (Bell), works to keep the political machine that is toy production afloat. It isn’t easy as they juggle the factory elves, including Nick’s head elf Matilda (Byer) and the political activist Helenor (Zamata), as well as parenting two sons – Nick’s mini-me Harry (Cho) and the crown prince, Jack (Simons), who’s not only next in line for the Suit, but also looking to rebrand it. Reporting on all the drama in THE POLE? Cocoa (Jost), host of the North Pole News Network Program, “Morning Cocoa.”

TZGZ is SYFY’s growing late-night adult animation block (TZGZ comes after SYFY, duh). It’s on Saturdays at midnight and it’s perfect for when you’re feeling chill, funny and maybe even have the munchies. We’ve got animated comedy with a genre twist and of course, a High Wizard to keep you company. What else do you need? Oh, a list of programming. Sure, HERE ya go.

Founded in 2007, Yeti Farm Creative, has built a stellar reputation for creativity, quality and service, as one of British Columbia’s premier and highly sought after 2D and CG animation and post production service studios. In addition to its expanding services division, Yeti is nurturing a growing roster of original and ambitious intellectual properties in both live action and animation. Operating out of its newly expanded 11,000 sqf state of the art studio in Kelowna, British Columbia, Canada, the studio provides script to screen production services to leading global studios and iconic brands including Amazon Prime, Sega, Corus, 9 Story Media Group, Mondo Media, NBCU and Electronic Arts.