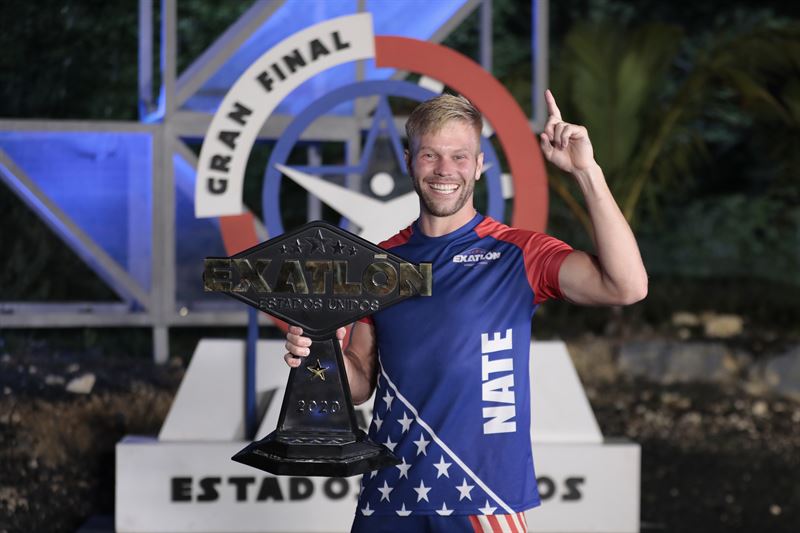 MIAMI – October 13, 2020 –Telemundo’s Exatlón Estados Unidos concluded its fourth season last night when Nate Burkhalter was announced as the champion of the fiercest competition on U.S. Spanish-language television. Joined by finalists Alondra “Nona” González, Emmanuel Jaquez and Dennhi Callú, host Erasmo Provenza, as well as Marisela "Chelly" Cantú and Frederik Oldenburg, the 34-year-old Texan celebrated his victory and the coveted $200,000 cash prize at the end of the three-hour broadcast.

Two-time American Ninja Warrior finalist, Nate Burkhalter, is a spartan race champ based in Houston, Texas, who is an engineer, philanthropist and passionate competitive sports enthusiast. During his high school years, he became the best tennis player of his generation for two years, but his real passion was football. He was in the process of being selected by the Louisiana Tech Bulldogs football team, but an accident forced him to abandon his dream. Due to the incident, he needed wheelchair assistance and had to go through rehabilitation for six months to recover his strength and flexibility. For him, Exatlón Estados Unidos has been a great opportunity to exceed and push himself to new levels of competition.

Audiences can watch full episodes of Exatlón Estados Unidos live or catch up on the Telemundo app available in the Google Play Store and Apple Store or by visiting Telemundo.com. Fans of the show can join the conversation and keep up with the latest news about the competition on Facebook, Instagram and Twitter, and get exclusive content on Telemundo.com/Exatlon.