TINA FEY TO HOST ‘ ONE NIGHT ONLY: THE BEST OF BROADWAY’ BENEFITTING BROADWAY CARES ON THURSDAY, DEC. 10 AT 8 P.M. ET /PT ON NBC

Two-Hour Telecast Celebrates the Vibrant Broadway Community with Performances From “Ain’t Too Proud - The Life and Times of The Temptations,” “Chicago,” “Jagged Little Pill,” “Diana: The Musical,” “Jersey Boys,” “Mean Girls” and “Rent” 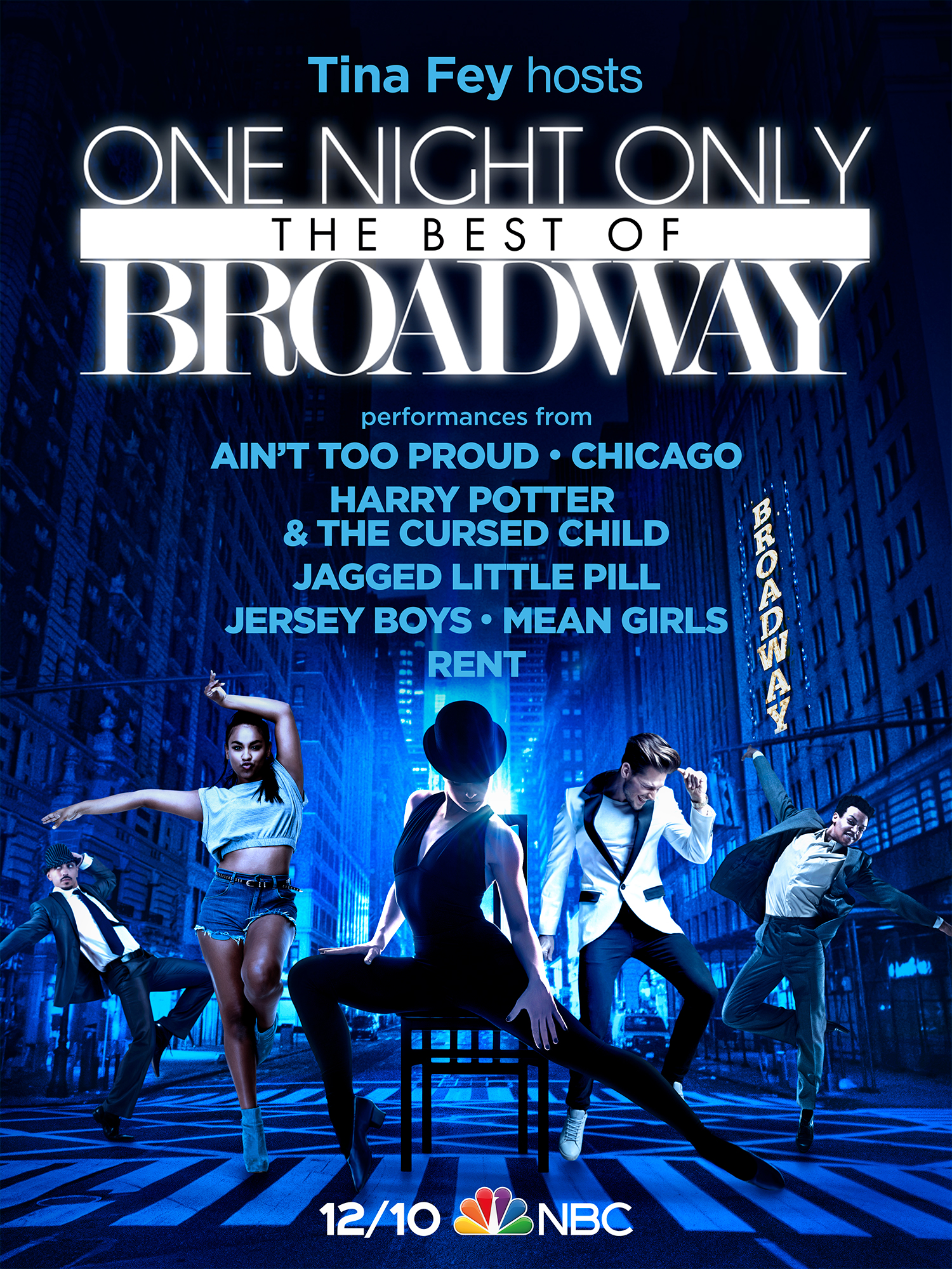 NEW YORK – Nov. 18, 2020 – Tony Award-nominated Tina Fey (“Mean Girls”) is set to host “One Night Only: The Best of Broadway,” an unforgettable night of music celebrating the incredible and resilient Broadway community and featuring songs from the Great Bright Way’s top productions. The two-hour special is set to air Thursday, Dec. 10 at 8 p.m. ET/PT on NBC.

Several of Broadway’s best shows will take over the streets of New York City with special performances from the casts of “Ain’t Too Proud - The Life and Times of The Temptations,” “Chicago,” “Jagged Little Pill,” “Diana: The Musical,” “Jersey Boys,” “Mean Girls,” “Rent” and an appearance by the cast of “Harry Potter and the Cursed Child.”The night will also showcase special sneak peaks at Broadway shows coming in 2021.

In addition to the telecast, NBCUniversal is making a donation to Broadway Cares/Equity Fights AIDS.To find out how you can help please go to broadwaycares.org/help2020.

“I'm so happy to be a part of this night, raising money for Broadway Cares, and to watch these mega talented people do what they do best,” Fey said.

“With Broadway being crippled by current events, it’s never been more vital to showcase these incredible performers and remind audiences of their extraordinary talents for when they return to the stage,” said Doug Vaughan, Executive Vice President, Special Programs, NBC Entertainment. “We’re proud to partner with Broadway Cares and do our part to help those in that tight-knit community during these difficult times.”

“We are deeply grateful to NBC for making this special evening possible and to the spectacular lineup of Broadway’s best who are so generously sharing their time and talent,” said Tom Viola, executive director of Broadway Cares/Equity Fights AIDS. “The joy that this special will create will translate into meals and medication, health and hope for those within our Broadway community who are struggling during this pandemic and extraordinary work shutdown.”

Fey’s Broadway musical adaptation “Mean Girls,” based off of her 2004 cult classic film that she wrote, opened at the August Wilson Theater in 2018. Directed by Casey Nicholaw, and with music written by her husband Jeff Richmond, the show received 12 Tony Award nominations, including Fey for best book. Currently, Fey is in production on NBC’s “Mr. Mayor,” which she is writing and executive producing with Robert Carlock. Fey and Carlock are also executive producing “Girls5Eva,”a comedy series for NBCU’s upcoming streaming platform, Peacock.

For more information and images from the show please visit the NBC Universal Media Village website at http://www.nbcumv.com.

Broadway Cares/Equity Fights AIDS is one of the nation’s leading industry-based, nonprofit AIDS fundraising and grant-making organizations. By drawing upon the talents, resources and generosity of the American theatre community, since 1988 Broadway Cares/Equity Fights AIDS has raised more than $300 million for essential services for people affected by HIV/AIDS, COVID-19 and other critical illnesses across the United States.